This is the gate to Trolltunga! Let us tell you the story about how it all started. See Trolltunga in a new perspective.

The British gentlemen who “discovered” the stunning scenery of Tyssedal and Odda in the 1820s were the first of a large number of tourists to visit this beautiful area. The main attractions for the tourists were the waterfalls and the glacier. Foreigners were more than willing to take on a demanding all-day-journey just to be able to admire the impressive Tyssestrengene and Ringedal falls. 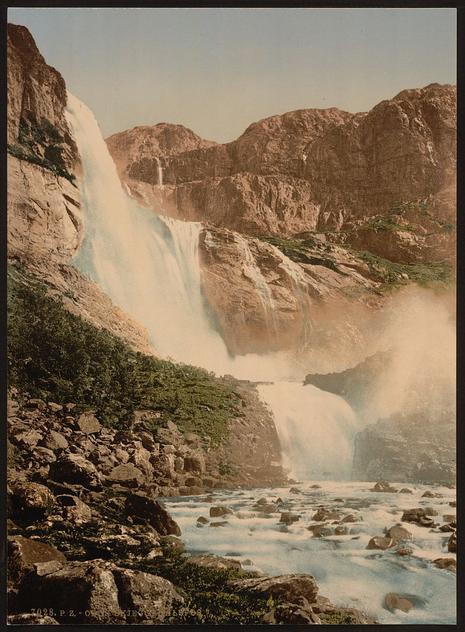 Here are a few excerpts from  the early 20th century English guide books:

The Hardanger Fjord is very accessible from Bergen; during the summer, steamers sail about six times a week, making the tour of the fjord. Sør Fjord, an arm of the Hardanger Fjord, runs due south, and is justly famed as the most beautiful part of Hardanger. The sides of the fjord are covered with orchards, and cherries and apples grow with great luxuriance. The steep mountains to the west are crowned with glaciers, offshoots from the great Folgefond ice-field, and on the eastern side are lofty and rugged mountains.

The scenery increases in grandeur as you reach Tyssedal. The great water-power, which has for centuries been running to waste, has at last been successfully bridled, and an electric power-station established for generating electricity, required for the carbide factory at Odda. Enormous turbines are driven by water obtained from the Ringedalsvand, and conducted to Tyssedal by a tunnel cut through the rock. Over 100 000 horse-powers are generated and conveyed to the works at Odda.

The chief attraction of the fjord lies in the great ice-field of the Folgefond, and the wonderful waterfall of the Skjeggedalsfoss, which may be visited from Odda. The valley leading up from the fjord is remarkable for its stern and impressive grandeur. Landing beside the power-station, you follow the riding path on the left bank of the river Tysso, ascending most of the way, until you reach Skjeggedal, where there is a small hotel. Crossing the river, you come, in about ten minutes, to the Ringedalsvand, a fine lake about 6 kilometres long, at the end of which is the Foss. Here you get another motor-boat that brings you to the fall. About half-way up the lake you have, on the left, the beautiful Tyssestrengene Fall, in which two rivers, which leap from the cliff, form one fall half-way down. The scenery here is very beautiful, and looking back, there is a grand view of the Folgefond. In 40 minutes you land near the mighty Skjeggedalsfos, which has a sheer fall of about 522 ft. The total height of the fall, from the top to the lake, is about 1300 ft. 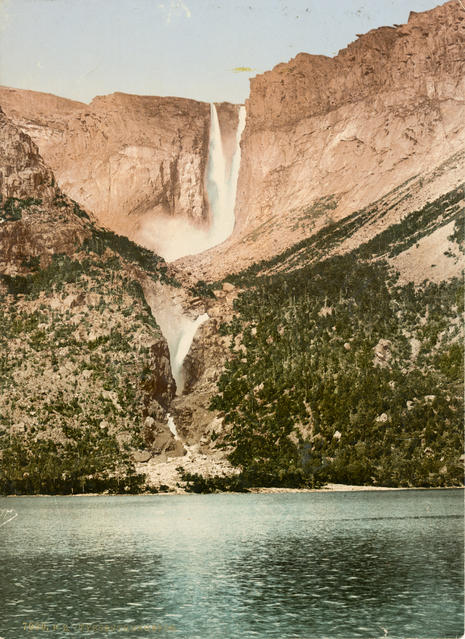 Tyssestrengene with the now famous "Trolls Tongue" hanging over the lake. Photo:Kraftmuseet archives

Tyssestrengene falls has a sheer drop of more than 300 metres, the highest in Norway. Ringedal falls is actually higher and larger, but has a sheer drop of “only” 160 metres. The Norwegian Mountain Touring Association (DNT) made an early effort to preserve these waterfalls, and they obtained an easement on the nearby farms for this purpose. In 1920, under intense pressure from industrial developers, the organization abandoned its principles and sold the rights to Tyssefaldene falls for 250 000 crowns. DNT did, however, take the initiative to preserve Vettisfossen, a magnificent waterfall in Sogn og Fjordane county.

Today, the waters of Tyssestrengene and Ringedal falls are diverted for power production, but the waterfalls flow once again whenever there is an overabundance of water in the water basins in the mountains above.

Property speculators and engineers also discovered these waterfalls. In the course of a few years, starting in 1906, Tyssedal developed from a valley with just a few farms to an industrial community.

The trails and roads to Skjeggedal valley

Even pack horses couldn’t traverse the first trail to Skjeggedal, so until 1898, the farmers who lived there had to carry everything on their own backs. Their loads were rarely lighter than 50 kilos.

After 1850 there was a growing stream of tourists to Skjeggedal. In 1898 the Norwegian Mountain Touring Association, DNT, began to build a new trail, in order to make the valley more accessible, for pack animals as well as people travelling on foot. By the time the Old Tourist Trail was completed in 1904, total costs had reached 12 000 crowns – an astronomical figure at that time. 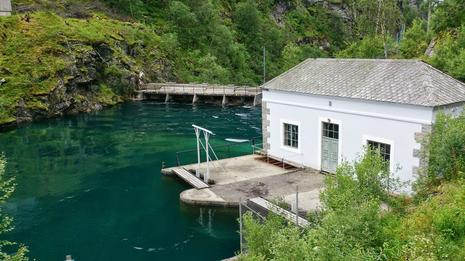 The forebay of Vetlevatn lake

Vetlevatn lake was used as a forebay.The water supply tunnels pass through 3.5 km of solid rock before reaching the distribution pool at Lilletopp in the mountain above the hydropower station. The current dam was built of reinforced concrete between 1921 and 1924, years of crisis for the carbide market and the construction industry. The original dam functioned as an overflow reservoir, and mere planks were used to regulate the flow of water.

It lies 460 metres above the pioneer hydropower station Tysso I, which is majestically situated on the shore of the fjord. It was here that the industrial adventure really began. The farmstead here is ancient and dates back to at least the Middle Ages. Like many other farms, it was vacated after the Plague. The owners died or moved to more fertile land elsewhere. Documents from 1616 describe the farm as “abandoned”. Later in the 17th century, however, people resettled the farmstead. 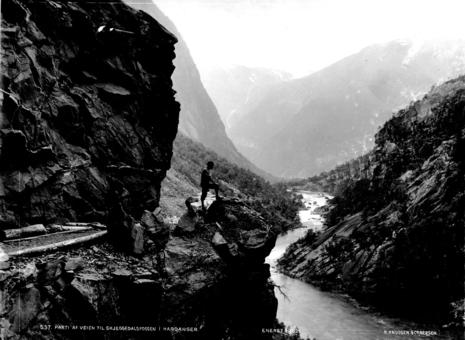 According to an old legend, Skjeggedal valley is named after an outlaw from the Telemark tracts that lie to the southeast. Skjegge (meaning beard), settled here, in the most remote area he could find, while he let his hair and beard grow, making him unrecognisable. If so, it must have been long ago; in Hardanger, the name Skjegge can be traced back to 1293.

There is also another possible explanation. On Iceland, Skjeggjadal, means a valley where a bearded troll lives behind the waterfalls.

At the dawn of the industrial development, 21 people lived in Skjeggedal. Today parts of the valley are under water. An average annual precipitation rate of 1178 mm certainly contributes to the local hydropower production.

Bears were once a major nuisance for the farmers in the valley, killing many sheep. The farmers used spring-guns to try to rid themselves of the bears; the last one was killed in 1876. There is a place by the lake still called Sjølskott – “Spring-gun”.

Today little is left of the old valley. There is an old building, Skjeggedalsstova, at the old farmstead, and a restored mill by the river shows how the locals used water power in olden days. Water-driven mills such as this were used in Hardanger since the 14th century, and it was said that people who had a river near their farm had reason to feel rich. 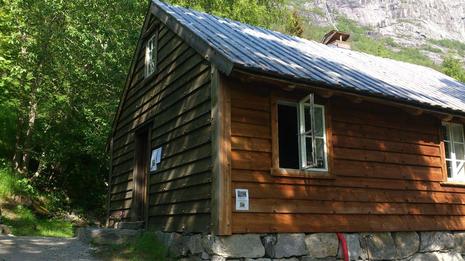 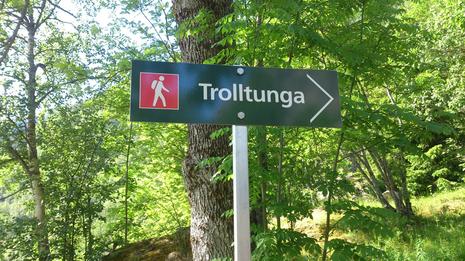 The trail to Trolltunga starts nearby.  Photo: Anne Gravdal Kraftmuseet

The old cable car is not intact anymore. It used to take people up to mount Mågelitopp, 830 metres above sea level. The 985 metre long cable car was originally built to carry supplies up to the construction workers on the mountain plateau, but in the 1950s it was modified for passenger transport. The breathtaking journey took 13 minutes and no one did ever complain about the view from the top. Today a new road has been built by privat owners of holiday homes on top of the hill. Tourists may walk the road on their way to Trolltunga 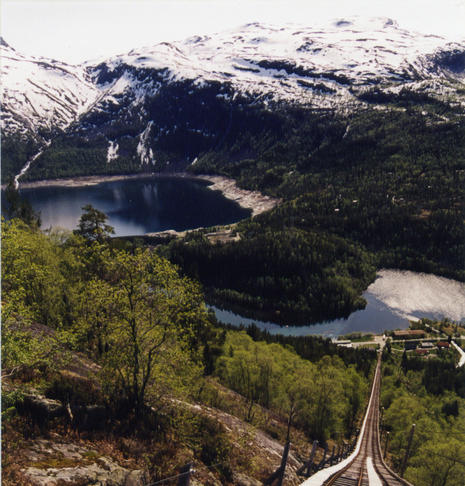 By the 50th anniversary of the power company A/S Tyssefaldene in 1956, the Mågeli watercourse had been regulated and a new power station at Mågeli completed. The Pelton turbines in the two aggregates are designed to produce 25 Hz power. In 1978 the facility was rebuilt, producing 132 million kWh per year at 50 Hz – 15 500 kW for each of the two aggregates. The maximum fall height of the water is 610 m. The watershed that supplies the power station encompasses an area of 60 km2. 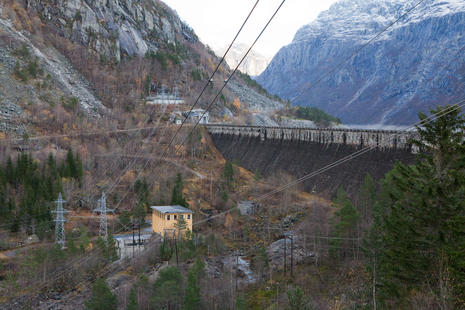 The Skjeggedal power station was built in 1938 in order to utilize the water from the Ringedal dam. It was the first remotely controlled hydropower station in Norway. In 1980 it was closed down, and since 1986 it has merely been used as a pumping station, pumping as much as 9 m3 of water per second back up to the Ringedal dam when there is an energy surplus. Some of the original equipment and instruments are displayed in Tysso I, the even older power station at the mouth of the valley of Tyssedal.

As it now stands, Tysso II was constructed between 1964 and 1967, although detailed plans for the power station had been drawn up before the war. When these plans fell into the hands of the German occupation authorities, they tried to complete it for their own purposes. Up to a thousand construction workers were mobilized in Skjeggedal between 1941 and 1943, when the project was stopped.

After the war, the power company, A/S Tyssefaldene, modified their plans. Tysso II, which was designed by the Bergen architect Geir Grung, opened on 21 September 1967. 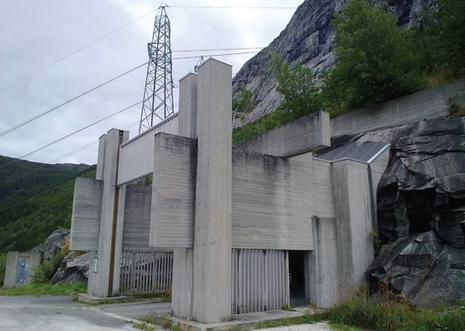 Tysso II is not visible in the landscape; it is buried 450 metres inside the mountain. 18.7 kilometres of pipeline tunnels from numerous small lakes feed its Pelton turbines. They are designed for 90 000 kW and produce 863 million kWh annually. The drop to Ringedal dam is 735 metres.

Ringedal dam is built of hand-cut granite and is the largest stone dam in Norway. The dam has a capacity of 407 million m3. A proud Ragnvald Blakstad, who was Director General of A/S Tyssefaldene from 1910 to 1918, had his initials cut into the face of the dam.

Migrant workers, or rallar, came from all over Norway, and even Sweden, to work on the many projects in Tyssedal. Old railroad workers, who had built the Bergen line across the mountains, met the sons of farmers and youngsters who had never before been away from their village. A lot of work had to be done quickly and many strong hands were needed. During construction, 300 migrant workers were active in Skjeggedal and another 200 in Tyssedal. As a result, change came rapidly to the narrow and once sleepy valley.

Experienced Swedes became the very symbol of the rallar and had the highest status. In everyone’s imagination he wore a felt hat, white shirt and vest, and had a pinch of snuff under his lip. Many Norwegians, too, imitated this image. One boy from Hardanger even earned the nickname “The Little Swede”, while other youngsters happily paid the real rallar good money for lessons on how to curse in Swedish! 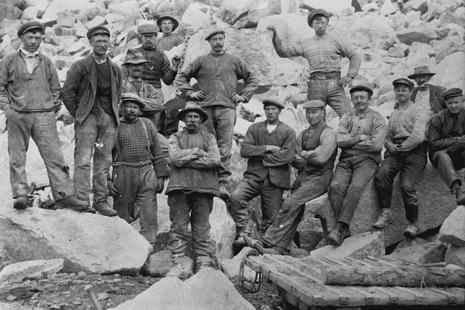 Navvies in Skjeggedal at the beginning of 20th century. Photo: Kraftmuseet archives

The migrant workers worked hard and long days for little money, and they had few days off. The work in the steep terrain of Tyssedal and Skjeggedal was very risky as well. Some of the work had to be done while they hung suspended from ropes. Yet in a year and a half, 500 rallar built a 3 kilometre long tunnel from Skjeggedal to Lilletopp lake, they erected a power station and pipestock, built a wharf and constructed a cable car, raised an office building, homes for the engineers, barracks for the workers, and hung a power line all the way from Tyssedal to Odda. Impressive by any standard! 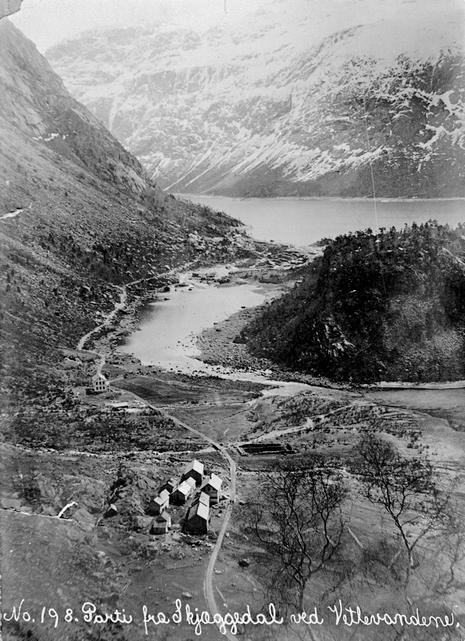 Your friend has been mailed an recommendation about this article.

Norwegian Museum of Hydropower and Industry